As a sophomore in high school, Josh Anderson played some of the best golf of his life. For a few tournaments, he even earned the No. 1 spot on the Murrieta Valley High School golf team in California, playing ahead of a fellow sophomore named Rickie Fowler.

Anderson was playing ahead of the future Oklahoma State star and Ryder Cupper until Anderson broke his arm in a car accident, forcing him to miss the end of the season and not play for eight months.

“It was tough sitting out that long, and it took a long time to get my game back,” said Anderson, now a junior at Pepperdine. “I was recruited by a lot of colleges before the accident, but once I got hurt, a lot of schools kind of turned their backs on me. It was kind of a bummer because it limited my options, but thankfully I ended up in a good spot.”

Regardless, he’s not too confident he would have held off Fowler for that No. 1 spot.

“Rickie was the best player on the team,” Anderson said with a laugh. “I might have been playing up there for a while, but it was no contest.”

Five years later, Anderson’s game is back in shape. After a semifinal appearance at the U.S. Amateur Public Links Championship this summer, he opened the college season with avictory at the Husky Invitational, where he also led the Waves to the team title.

“Josh is a great ballstriker, and he knows how to go low,” Fowler said. “We pushed each other to be the best that we could be in high school, and he was tough to beat. I think this could be a break-out season for him.”

“He’s always had a lot of talent, but now he’s starting to put everything together,” Geiberger said of Anderson, who is not the only Waves player hitting his stride this season. 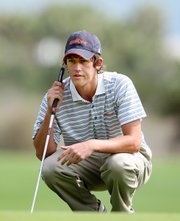 Senior Andrew Putnam finished in a three-way tie for first at Pepperdine’s second event, the William H. Tucker Intercollegiate, to give the Waves two individual medalists in as many tournaments this fall. Putnam also took second at the Husky Invite, four shots behind his teammate Anderson.

“I will put those two up against any 1-2 in the country,” said Geiberger, whose squad is No. 18 in the Golfweek/Sagarin College Rankings after tying for sixth at the Tucker.

“When you’ve got two guys that can win any given tournament – not hoping to win a tournament, but honestly one of the favorites – then you’ve got a good chance to be successful.”

Putnam said his victory was a product of a successful summer that saw him qualify for the U.S. Open and U.S. Amateur. He also won the Pacific Coast Amateur and finished second at the Sahalee Players Championship to Oklahoma State’s Peter Uihlein.

“(Winning the Pacific Coast Am) was big for me because I hadn’t really won a big tournament up to that point,” Putnam said. “I’ve been really close my whole college career – getting a lot of seconds and top 5s – but finally getting a win was big for the confidence.”

“Just getting to play with all the people that you see on TV and knowing that I can compete pretty well out there is huge,” said Putnam, who missed the cut after rounds of 76-78. “I think it was just big for me to see that they don’t do things too much differently than I do.”

Playing with touring professionals is not something entirely new to Putnam, however. His older brother Michael is a 2010 winner on the Nationwide Tour and currently No. 16 on the money list, hoping to finish the season in the top 25 and earn an PGA Tour card for 2011.

“Seeing him have success gives me motivation to play well and try to go out and join him some day,” Andrew said of his brother, who also attended Pepperdine. “It’s really pushed me to try to do things like take down some of his Pepperdine records.”

Michael, the 2005 Byron Nelson Award winner, holds the school’s lowest career scoring average at 71.61, but Andrew is closing fast at 72.11. But the No. 1 accomplishment that Andrew is hoping to duplicate is leading Pepperdine to an NCAA Championship berth, something the Waves achieved three times during Michael’s tenure but haven’t repeated since 2005-06.

“That’s obviously our No. 1 team goal – to play a national championship together,” Putnam said. “Hopefully we can keep up this pace because that would be a great way to go out.”

College Weekly takes a tour of Michigan State’s campus to see where the golf team practices.

Razorback rebound: In 2009, Arkansas was one Bronson Burgoon wedge shot away from a national championship, but Burgoon made a brilliant birdie on the final hole to clinch the title for Texas A&M. In 2010, the Razorbacks were four shots shy of advancing out of NCAA regional play.

Despite still having a young team, Arkansas coach Brad McMakin has different plans for 2011.

“We feel like these guys have really blossomed and turned us into a little more of a well-rounded team,” he said. “I think this team is more talented than that team we had two years ago.”

Last week, Arkansas won the Cabo Collegiate by 22 shots over Houston, with senior Jamie Marshall and sophomore Austin Cook finishing first and second, respectively. The Razorbacks opened the season with a third place at the Gopher.

“Last year we had a nice team,” McMakin said. “We just had a disappointing regional. I think now we have a little more experience and all of our younger guys have a year under their belts. They all had great summers, too, which is huge coming into the season.

Pink ’Pack: NFL players weren’t the only ones to show their support for breast-cancer awareness last week.

“The Kay Yow Breast Cancer Association gave us a bunch of pins and we passed them out to all of the teams, and every player wore them for the tournament. It was really a nice deal,” said Richard Sykes. “I tried to tell most of the guys at the event that, unfortunately for them, a lot of them were going to go through (breast cancer) with someone close to them because it’s so prevalent. You just don’t understand it until you’re involved with it.”

Sykes said Pam is doing well after her diagnosis and initial treatment.

“She’s finished with her all of her treatments and her hair is all grown back and things are going great,” he said. “I’m back to being the only one in the house with no hair, which is good.”

The Wolfpack, No. 15 in the Golfweek/Sagarin College Rankings, won the event by four shots over 12th-ranked Duke, with N.C. State freshman Albin Choi taking the individual title. It was the Wolfpack’s second team victory in three fall events.

Where: The Brickyard at Riverside, Macon, Ga.

Why it’s important: Defending national champion Augusta State gets a chance at its first win of the season. The Jaguars have finished T-2 and T-4 in their first two fall events, both of which had extremely strong fields. Standing in the way of the fifth-ranked Jaguars will be a pair of tough in-state rivals: No. 10 Georgia Tech and No. 16 Georgia.

Off Campus gets to the bottom of the most common rules infractions by amateurs and collegians.